When the day comes, she welcomes you to her dungeon for the interview. She seats herself in front of the camera and proceeds to answer your questions as you stand off-screen. During the questions, she starts to tease you a bit, seemingly testing your composure, although you're not sure why...

...not until she smothers you with her black leather gloves. Once you come to, you realize she's got you bound, gagged, and collared, and she's taken over the interview. Then she finally reveals her true intentions: to break you down and turn you into her obedient new boot-licking slave.

This clip contains he/him pronouns and references to penis, leather and boot fetish elements, words on screen for the interviewer's dialogue (but only my voice is heard throughout), aggressive/angry verbal and degradation (name-calling "bitch," laughing and mocking, etc.), and the roleplay of a bondage scenario in which I tease, smother, and then tie up the interviewer to demand his servitude. I also talk to the camera throughout as though I'm speaking to a large audience of viewers who are watching the whole interaction. 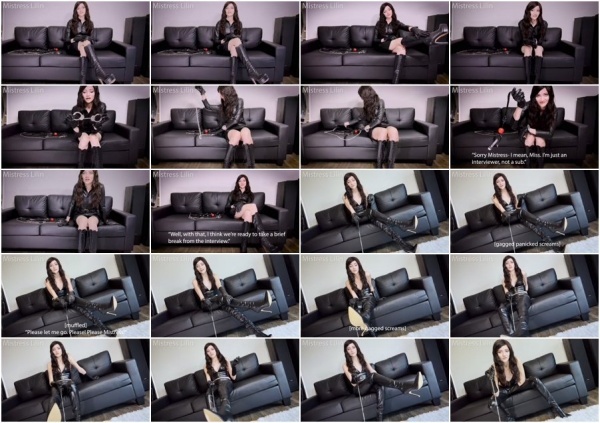