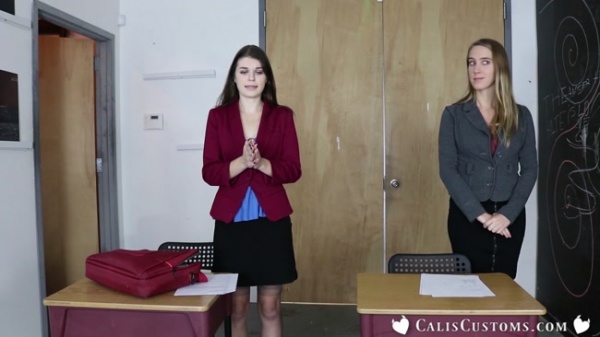 Judge Vonka Romanov opens her case files for the day, checks her phone, and puts on her legal robe as court will soon be in session. “All rise. The honorable Judge Romanov is approaching the bench. Court in now in session.” Cadence Lux hurriedly stands up, looking very nervous, but ready. And the prosecutor, Anastasia Rose, suddenly runs in.... obviously late... and she tumbles over her bag, emptying her court files everywhere! Counselor Rose is a mess! Judge Romanov graciously excuses her lateness, and proceeds with the court hearing. Prosecutor Rose carries with reading Cadence’s Lux’s actions, “...Miss Lux was seen leaving the bank in a state of undress. She was confronted by an officer, who attempted to place her under arrest for indecent exposure... Cadence Lux then kicked the officer in the goin and runs away....” Prosector Rose is astonished, and Cadence just rolls her eyes until she catches glimpses of horror from Anastasia. Apparently, Cadence was easy to locate as she was still wearing handcuffs.. on one wrist. Cadence is here without an attorney, but is given the chance to explain herself, She fesses up, Cadence really did leave the bank undressed, but it wasn’t her fault! Supposedly, the bank took her clothes as a down payment for her new account!!! Cadence tries to argue that if she had known beforehand, she never would have opened an account! Suddenly, Anastasia’s phone rings!! This pisses off Judge Romanov so much that she gives Anastasia a small fine!! She bangs her gavel.. and it appears that Anastasia may be missing a layering of clothing!! Anastasia closes her suit jacket in full embarrassment and tries to act like nothing happened. Judge Romanov asks Cadence to continue... and she does, by saying the the officer wanted to search her naked body before trying to handcuff her!! What did he have to search?! She was naked! Cadence just panicked and automatically kicked the officer in the groin! Prosecutor Rose reads off FIVE charges, and Judge Romanov emphasizes that all her misdemeanor fines must be paid today with the AI System. Cadence says with a little attitude that she’s doesn’t have enough money, but she knows the AI System well... Judge Romanov gets pissed off at the attitude and demands $50 for her indecent exposure charge... or her suit jacket. The suit jacket disappears!! Cadence looks very embarrassed, as Judge Romanov continues... Judge Romanov looks up and sees Prosecutor Rose is texting!!! The Judge let this one slide, but the AI System seems to have snatched Anastasia’s skirt anyway!! It just vanished! Must be that darn parking ticket she just got for getting here late!! Next, the Judge concludes that the stolen handcuffs are only $25 since they were returned to Officer Friskum... or the equivalent of Cadence’s blouse! The blouse is gone, but Cadence quickly covers her breasts with hands in embarrassment... Three larger, more serious charges to go... will there be any clothes left??... 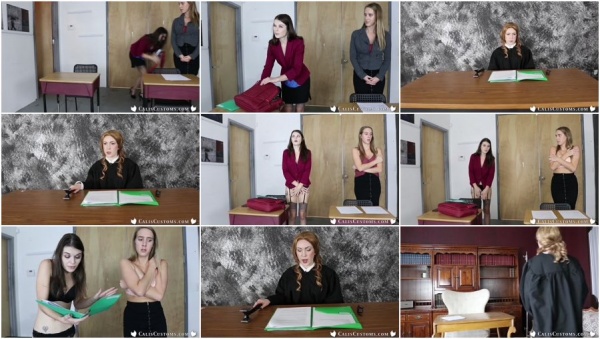